Newly developed designer cells as alternatives to established cell lines such as MDCK or Vero cells are currently under investigation for vaccine production. Potential candidates are the duck cell lines AGE1.CR.pIX® and its progenitor AGE1.CR®, developed and kindly provided by ProBioGen AG. Both cells are adapted to proliferation in suspension in chemically defined media to simplify manufacturing processes [1].
There are several options for vaccination, i.e. the use of vaccines that consist of a whole virus or virus parts to induce immunity, or the use of vaccines that consist of a vector which carries certain genes to induce immunity.
An example of a vaccine where the virus itself is used as a vaccinating agent is the influenza vaccine. On the other hand, a promising vector to deliver vaccinating agents against different diseases (e.g. malaria or tuberculosis) is the highly attenuated Modified Vaccinia Virus Ankara (MVA), which is used for smallpox vaccination [2]. Due to a number of deletions and mutations, the host range of this virus is restricted to avian cells. For this reason, an avian cell line is desirable for vaccine manufacturing.

To characterize the potential of the duck AGE1.CR® cell lines, influenza virus and MVA are used as model viruses in this project [3].

To use the full potential of new cell lines and to support design of manufacturing processes, comprehensive studies with different viruses are required. Different seasonal influenza A and B virus strains and cold adapted viruses provided by Polymun AG are tested. In addition, wildtype MVA and fluorophore labeled MVA strains, e.g. a recombinant MVA strain expressing GFP (kindly provided by Prof. Sutter, LMU Munich), are used. To characterize production cell lines as thorough as possible, a broad range of methods and assays are used. These include:

The latter technique is used to monitor changes in cell cycle, induction of apoptosis and progress of infection. Using the GFP expressing MVA strain, monitoring the infection within the cell population is highly simplified. 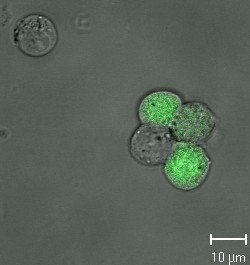